How would you imagine, how many people wearing golden accessories think of workers in the gold mines? How many of them know that statistically to produce 1000 kg of gold takes away 1 life a miner and causes 10 serious injuries? Knowing Mauritania’s dependency on mining industry, I have chosen it to be my investigation topic. We got the first contact in Zourzazate, the miners’ city, completely dependent on iron ore. It took us 20 hours, 700 kilometers of interesting train ride to reach the place. This is what I would like to share my experience about.
The first thing you will be asked in the train station, as well as anywhere else in the street, is to show your passport for the police. It makes you to forget about the Schengen zone and European privileges of free movement, remembering the place where you are. Because of conflicts with Al Qaeda groups your identity is the number one thing to be kept close. After giving all our passports details we could buy a ticket.

Already in the train station there were people with blue uniforms of the giant mining company SNIM.
Train arrives, surprisingly not late, people start running and squeezing through windows just to able to get inside. Here the ride begins: I remember the next 20 hours as social research with tea, observations and thoughts about industries against people. 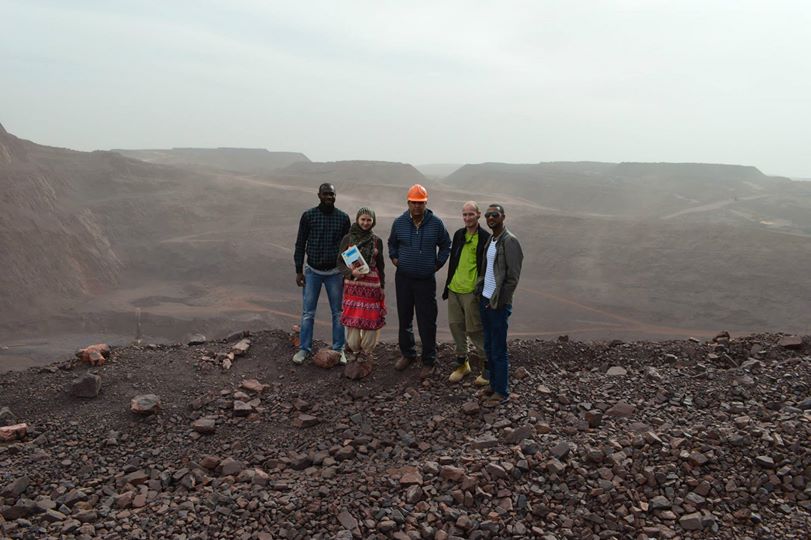 Notice number 1 – the train is not made to transport people; it is transporting mines, but the workers from the mines has to transport themselves somehow as well to visit their families. As this train is the only way, some of employees even refuse to go home or postpone the travel, because of its tiring conditions. Mothers with newborns sleeping on the floor, more arrogant guys smoking under the no smoking sign, everybody breathing the same iron dusts. Even with these conditions floors and benches are fully covered with people, because they simply have no other choice. Not even mentioning the ones who travel in the open wagons on top of iron ore. For us it was I could say only two ways scary ride – interesting and keeping the attitude as crazy as better the experience.

Notice number 2 – One Mauritanian, with whom we were talking, said few words which sound in my memory: “It is difficult.” – He said, “But not for us. It is difficult for you, Europe, because it is not your daily life.”
He is living in this train, selling tickets as his daily job; meaning 24/7 train life. Apart from all the nice teas, talks and food we had, somehow I concluded that poverty connected these people. I was constantly thinking of humanism and how it became usual to have 3 expensive cars; meanwhile your workers spend days in the train which is not even suitable for people just to come to the job.
Notice number 3 – On one stop in the middle of the dessert I was invited to the first class. To make it more visual – it was not better than the previous wagon, just the sense of superiority and separated cabins, which was even scarier, because you lose the possibility to communicate with passengers. It was hard for the man who invited me to realize that I will not travel in the higher class just because of my race.
“Why not?” – He asked.
“Because it simply does not go this way.” – I answered confused.
“But it always went this way.” – He answered without any confusion.

It is hard to treat deeply rooted believes.

One thought on “The longest desert train ride”