The gates from Europe to Africa – strait of Gibraltar starts with inconceivably huge port, industrial zone and compilation of political borders: Spain, United Kingdom, Spain again and only then Morocco. Suspicious feeling about enormously intensive goods transit and giant walls for illegal people migration frees imagination for the first thoughts what possibly we can expect to meet. The atmosphere is strengthened by border officers greeting “Have a nice travel and take care” and “Thank you for your trust” banner after the very last checkpoint. 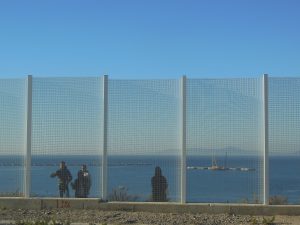 Eventually crossing the country and getting close to its reality through investigations the border of another side powerfully dots the I’s on a freshly gained knowledge; “No man’s land” was just a name for me before, correlating with Serbian conflict somewhere in background. The name itself describes a place, where nobody is living, but this what we saw surpassed a loudness of the name. 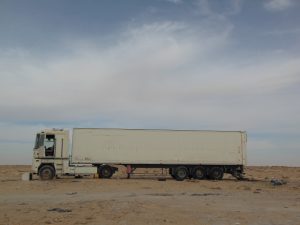 Historical Moroccan – Mauritanian border conflict left a strip of land which does not belong to anyone now. This surprise at first that in times of our global capitalism every square meter of land is a struggle to be privatized or nationalized and here – vast free landscape. Even if the gates to the country represent first impression none of the countries take care or show initiative for collaboration at least to build a road among them. It is completely neglected place with a layer of trash, abandoned or burned cars with conjectural histories and net of hardly so-called roads made only by everyday traffic of quite intensive heavy-weight vehicles. It took us eight hours to drive those five kilometers! 4×4 off-road experience and hard work of co-drivers helped us to overcome this challenge without damage on the rocks or stuck the bus in sand. We were laughing in the end from average speed of the day. 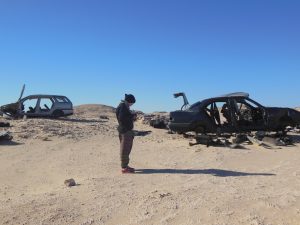 To cross any border takes at least a full day in Western Africa, we even had a subject “Border crossing” how complex and complicated it is, but here – an obvious difference between the countries and all kind of diversity literally means that those borders are only outlines on a paper and today we can only imagine how the world would look without them. 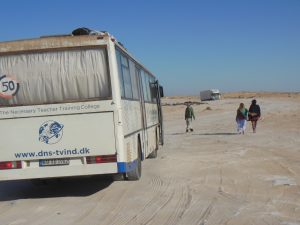